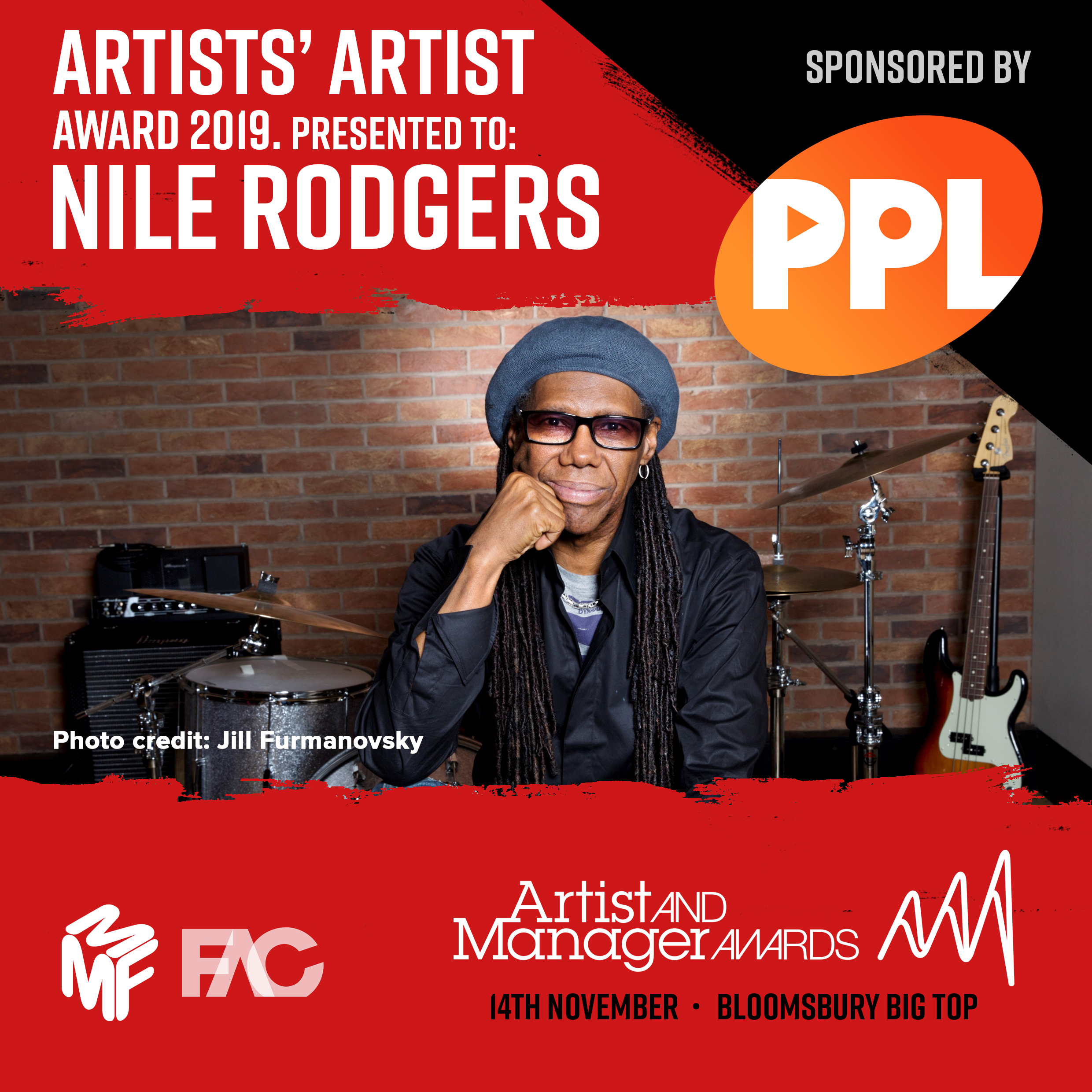 The Featured Artists Coalition (FAC) and Music Managers Forum (MMF) are delighted to an-nounce that legendary songwriter, performer, producer and musical innovator Nile Rodgers is to receive the coveted Artists’ Artist Award at the 2019 Artist & Managers Awards (A&MAs) which returns to the Bloomsbury Big Top on Thursday 14th November.

Voted for by fellow artists in the FAC and peers, the Artists’ Artist Award, sponsored by PPL, recognises the extraordinary long-term creative and innovative musical output of an individual or group. Previous winners include Guy Garvey, Tracey Thorn, Joan Armatrading, Placebo, Robbie Williams and Massive Attack.

In a career spanning five decades, Nile has changed the course of musical history. As co-founder of the CHIC Organization, alongside bassist Bernard Edwards, his multi-million-selling hits of the late 1970s defined an era and continue to fill dancefloors around the world - including “Le Freak”, “I Want Your Love”, “Everybody Dance”, “Dance Dance Dance”, “My Forbidden Love” and “Good Times”, the latter also providing a blueprint for hip-hop via The Sugar Hill Gang’s “Rapper’s Delight”.

Nile’s work in the CHIC Organization and his productions for artists like David Bowie, Diana Ross, and Madonna have sold over 500 million albums and 75 million singles worldwide while his innovative, trendsetting collaborations with Daft Punk, Avicii, Sigala, Disclosure, and Sam Smith reflect the vanguard of contemporary music. Nile Rodgers & CHIC most recently re-leased their first new studio album, “It’s About Time” in over 26 years to critical acclaim and a Top 10 position in the UK album charts.

Nile has, of course, been widely recognised for these many career achievements. He is a multi-ple GRAMMY winner, a member of the Rock & Roll Hall of Fame, Chairman of the Songwrit-ers Hall of Fame, an Ivor Novello winner, an Honorary Doctor of Music at Berklee College of Music and Chief Creative Adviser at Abbey Road Studios. In 2019, he is also curator of the 26th Meltdown Festival at London’s Southbank, performing as Nile Rodgers & CHIC alongside a handpicked line-up that includes SOPHIE, Thundercat, Jungle, Johnny Marr, Songhoy Blues, Despacio, Kokoroko and Dave Stewart’s Eurythmics Songbook.

The FAC are honoured to add to these illustrious achievements by voting Nile their Artists’ Art-ist 2019.

“I’ve been very lucky to receive recognition for my achievements throughout my career but this is very special. To be selected as “The Artist’s Artist” by some of my favourite artists is truly special. To receive that recognition from a panel as diverse as Annie Lennox, Nick Mason from Pink Floyd, Ed O’ Brien from Radiohead, Sandie Shaw and Dave Rowntree from Blur and so many others is very, very meaningful to me and will make for a special night in my life at the Artist & Managers Awards”

“Try to stay still to anything Nile Rodgers has put his musical touch to. As an erstwhile dancer I have spent decades of my life feeling alive to Nile’s music and working with artists clearly in-fluenced by his style, rhythm and sense of soul. He is the kind of super talent you only see a handful of times in a lifetime and his music has been very much a part of many lives and gener-ations. Still fresh, still kicking it and still making us dance, I am unbelievably excited to finally have the opportunity to thank Nile for his music and to honour it amongst his music maker peers”

“Being able to influence the direction of popular music across five decades requires a level of creativity and innovation few have. Nile Rodgers’ back-catalogue is a testament to his talent as a musician, and we are proud to present him with this award. Through this award we are also pleased to support the MMF and the FAC, who work to represent and support artists and man-agers in the music industry.”

Further winners will be revealed in coming weeks. Table bookings for the awards are available now. For more details email fiona@themmf.net or visit https://amawards.org